With roots based in the rich technical heritage of AT&T/Bell Labs, Lucent and Hewlett-Packard/Agilent, Broadcom focuses on technologies that connect our world. Through the combination of industry leaders Broadcom, LSI, Broadcom Corporation, Brocade, CA Technologies and Symantec, the company has the size, scope and engineering talent to lead the industry into the future.
Broadcom is focused on technology leadership and category-leading semiconductor and infrastructure software solutions. The company is a global leader in numerous product segments serving the world’s most successful companies.
Broadcom Inc. combines global scale, engineering depth, broad product portfolio diversity, superior execution and operational focus to deliver category-leading semiconductor and infrastructure software solutions so its customers can build and grow successful businesses in a constantly changing environment.

Installation of Norton 360 Deluxe Mac proofed easy and straightforward. The basic installation needs a reboot for completing, nothing special as some other developers have an equal procedure. Make sure to uninstall any other antivirus on your Mac before adding Norton. Two similar programs can produce a lot of problems on your running Mac. During installation the installer asks for permission to install a helper tool. After reboot, open Norton 360 and make sure to run LiveUpdate. In order to get a running and fully working application, you need to grant full access to files and folder through System Preferences. You will be prompted to set these options before continuing the setup. The first thing you will notice after full setup is the new interface of Norton while you still can opt for the classic interface. To complete all options presented you will need to use the web-based interface of Norton.
Surprisingly the offered option “Cloud Backup”, is NOT available for Mac users ! This is not mentioned specifically when choosing your version from the website. Support from Norton is not aware of any future implementation of this feature for Mac users. 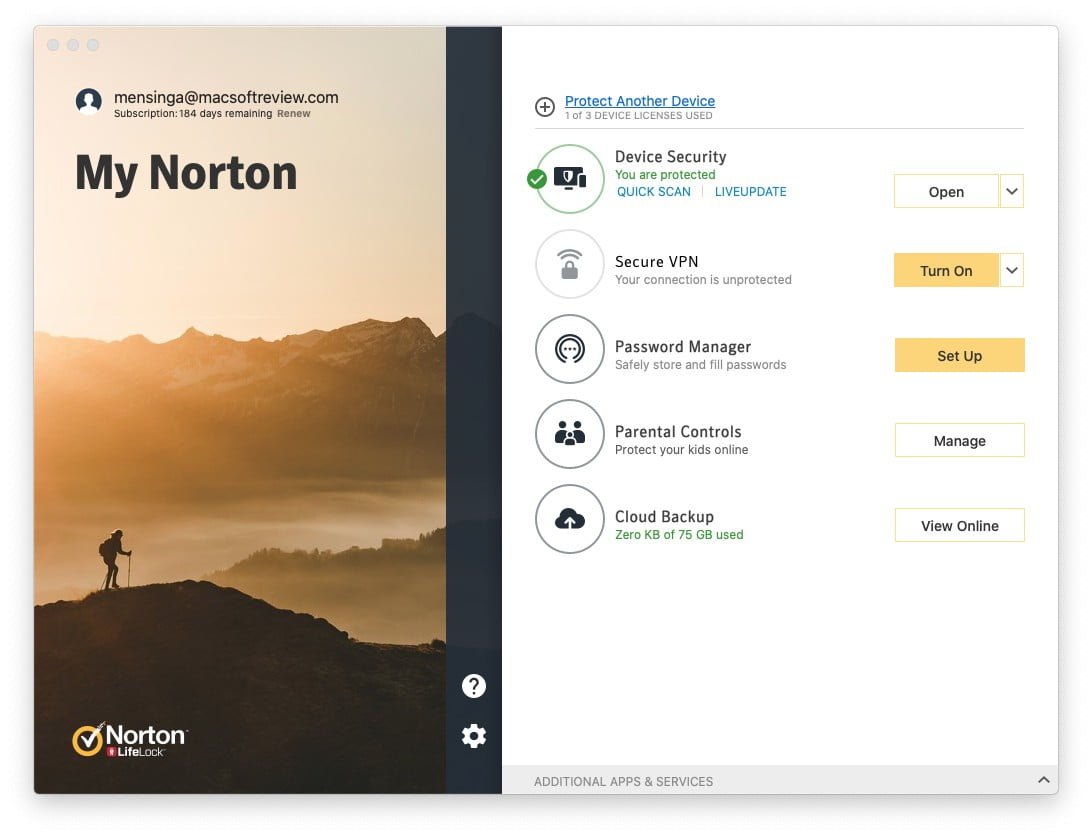 Now the big question Why or DO we need an Antivirus software application for our Mac computers ?

So do Macs get viruses? The answer is simple Yes and Yes they need protection. Although a Mac is considered more safe to PC’s, they also face the same treats as PC’s do.
In the past Mac’s were not widely used on our planet so they were less interesting to people trying to pry in your computer software and look for any interesting data like your bankaccount and used passwords etcetera.
But in recent years, as Mac’s popularity has grown, Macs have gained the attention of those looking to hijack data or make you visit websites that are after your credentials or money. We have a complete list of all the Mac viruses, malware and security flaws that have hit the operating system here.

Despite this interest, Macs have generally remained fairly secure. Thanks to the fact that MacOS is based on Unix, a kind of default security is build-in.
Apple itself has included Gatekeeper and number of security measures that make attacking a Mac particularly challenging. Gatekeeper, blocks software that hasn’t been digitally approved by Apple from running on your Mac without your agreement.

Still plenty of risks left, and Macs haven’t managed to completely avoid being targeted. According to a report from Malwarebytes in August 2017, there was a 230 per cent increase in Mac malware in 2017. So YES your Mac needs protection!
Now there is a fast growing list of developers specialised in antivirus security all claiming to be best to buy. Of course if life was that simple, there would be only one software application available on the marker solving all our problems.

We (Macsoftreview) are not able to simply setup a full known malware and virus database for checking the software’s capabilities in catching exploits and vulnerabilities. We do rely on AV-TEST which is the best known It-Security Institute from Germany. They are able to test in absolute equal conditions for every package, and measure system impact is most accurate on their systems. Updates are performed on a regular bases to check if later software-editions have evolved.
Below the latest independent test shows all scores. Norton 360 Deluxe scores a full 100% detection rate !

As cyberthreats evolve, consumers need a single ally for device security, identity theft protection, and online privacy. Navigating today’s digital universe is complex and can leave consumers feeling out of control – with cybercriminals creating malware and phishing, ransomware and viruses, data breaches and unsecure Wi-Fi connections. We help protect you and your family when online with solutions that keep you Cyber Safe.

Device Security – Multi-layered, advanced security helps protect your devices and information from online threats like viruses, malware, and phishing.
Identity Theft Protection – We monitor for threats to your identity and provide restoration services to help if you do have an identity theft issue.
Online Privacy – Virtual private networking helps protect your privacy when information is being sent or received over Wi-Fi, wired, or mobile connections.
Home & Family – We help families enjoy connected devices worry-free with solutions like Parental Controls.

This review of Norton 360 Deluxe has the following features available, but not all features are available for all operating systems!

Real-time Threat Protection – Multi-layered, advanced security helps protect against malware threats to your devices, and help protect your private and financial information .
Secure VPN – Browse anonymously and securely with a no-log VPN.
Dark Web MonitoringPowered by LifeLock We monitor and notify you if we find your personal information on the Dark Web.§
Password Manager – Easily create, store, and manage your passwords, credit card information and other credentials online – safely and securely.
50GB Cloud Backup – Automatic, secure cloud backup for PCs – NOT MAC USERS !!
Parental Control – Manage your kids’ activities online.
SafeCam – Get notified if cybercriminals try to use your webcam, ONLY WINDOWS !!

Though many features are nice, the most important factor for buying a antivirus program is still its ability to protect you 100%. AV-Testing resulted in Norton detecting every instance of known “widespread” malware and of previously unseen “zero-day” malware in all 12 monthly evaluations by German lab AV-Test from January through December 2019.

Norton products, include a two-way firewall, an unlimited password manager and a file-backup program. They also include the company’s Safe Web browser extensions, which work with Safari, Chrome and Firefox. Safe Web’s Isolation Mode renders the contents of known dangerous sites as read-only. If you connect to a banking site, Norton runs the browser session in a virtual machine. Norton’s 360 malware-detection engine takes up few system resources in the background, but more resource impact during active scans. (Best set the scans to run overnight.) 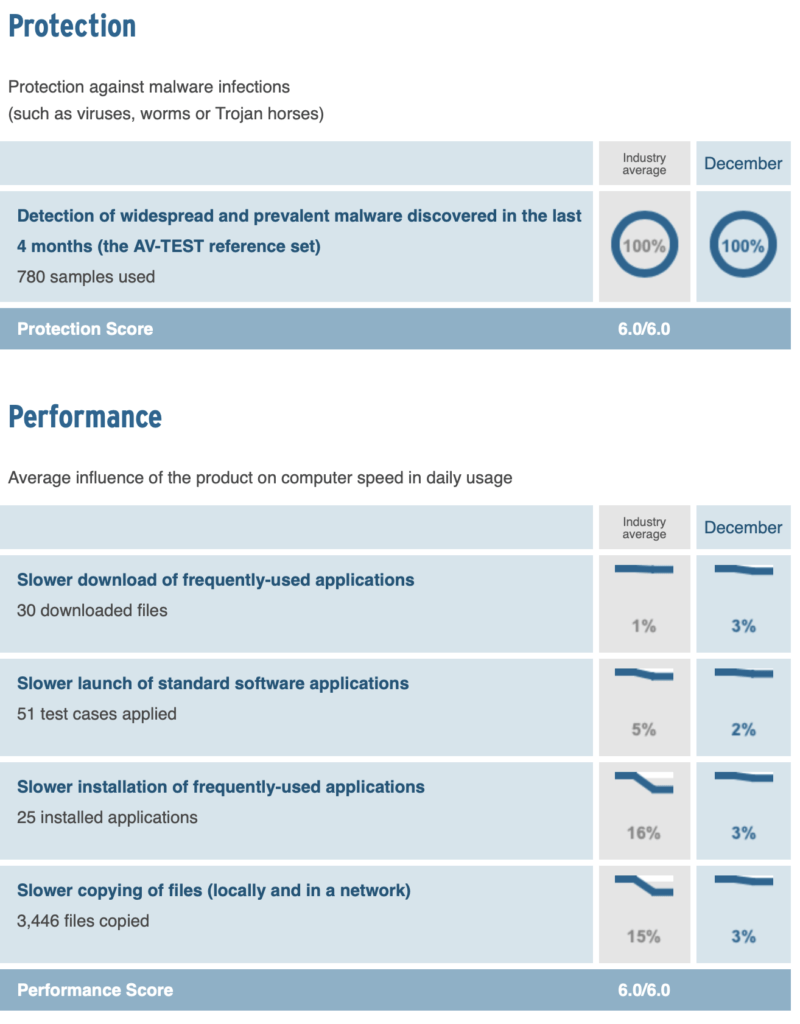 Norton 360 comes with a no limit VPN solution integrated in the Deluxe package. Bitdefender is also equipped with a VPN but has a really low daily usage limit, which makes it unusable really. Norton however boasts a full No Limit  and No logging VPN. Browse anonymously and securely with a no-log VPN. Add bank-grade encryption to help keep your information like passwords and bank details secure and private. So what’s not to like about the VPN, well that’s easy as it supports very limited servers globally (has servers in 29 different countries and 73 locations.). However in Europe you will always find a server available and for the Netherlands even brilliant speeds. ( See VPN Speed below )

The settings are limited but connections are fast and stable. I really enjoyed using the Norton VPN solution. Again this great option adds value to this full packages deal. The interface of Norton 360 is somewhat strange, as it takes some clicking your mouse button to see how the VPN interface opens as it is not present in the menubar, rather then just only the ‘connect’ or ‘disconnect’ button. Still when you’re all familiar its a very good VPN.

Though Norton claims No Logging policy for this VPN, you should realise that Norton is based in the USA and therefore committed to US laws. Us laws do not permit No logging !  You do get noticed if officials want to trace you down. Testing ip6 security, Norton VPN hides your IP in a truly safe way, as are any DNS leaks.
Still for ordinary use, this VPN works well for daily practice.

Norton 360 Deluxe is providing a true No logging VPN and great speed. The examples below shows a speed image with NO VPN active, and the second with a VPN choice activated. Normally many servers create a fair speed drop of 40% easy, while our tested speeds only drop somewhat on ‘upload’.
I am very very pleased with its performance. 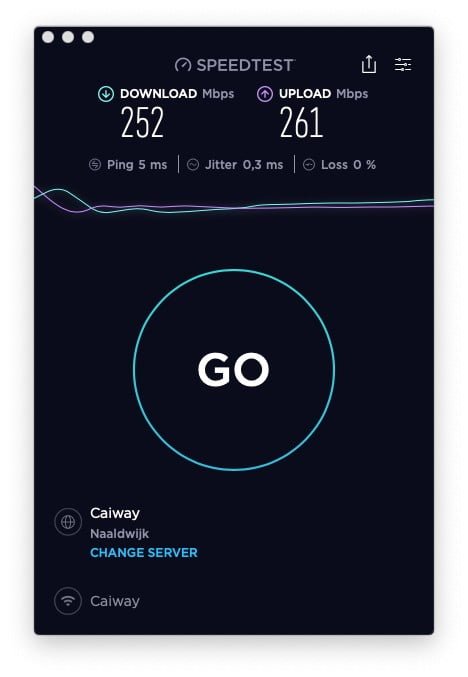 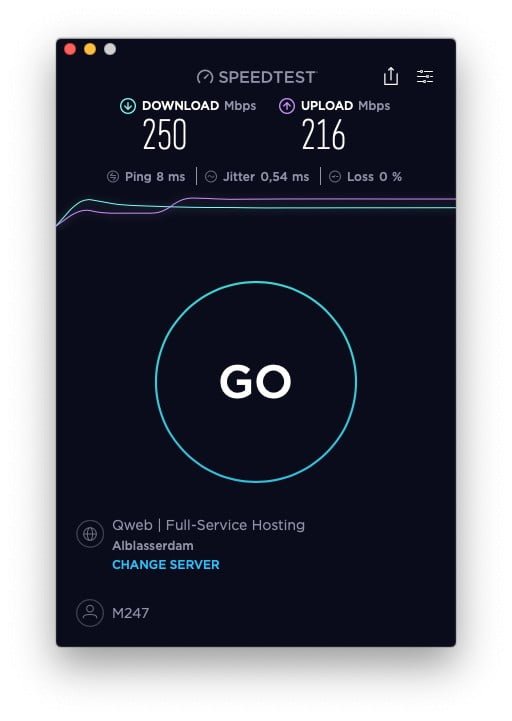 Easily create, store, and manage your passwords, credit card information and other credentials online – safely and securely. A password manager should be on every computer really. Nowadays you make yourself vulnerable if you use the same password frequent, in order to protect yourself you better use a different password for any website visited. You don’t want to become a victim of identity theft, believe me. The setup is not inside the application but is web based, this is unlike many other antivirus programs which are more controlled from within the application itself. It did make me click around somewhat
to find the places and final setup. Once installed and active it works very well and again this is a true bonus for this package. It does not have the features and smooth interface like Dashlane of course, but it is free and part of a great deal.

The Smart Firewall monitors the communications between your computer and other computers on the Internet. It also protects your computer from such common security problems as the following:

While macOS features its own firewall to stop applications from connecting to risky websites, Norton 360 Deluxe adds its own two-way firewall, which stops certain kinds of data from getting in or out. Its services also protect your system from risky networks and known dangerous IP addresses.

What is the Dark Web? An “underground” part of the Web that isn’t searchable by regular search engines. The Dark Web is where cybercriminals offer information for sale, including personal data like email addresses. Dark Web Monitoring Powered by LifeLock§ searches Dark Web markets for your email address, and we notify you if we find it. A truly useful bonus as you ( your mail address, and maybe passwords) definitely will be known on the Dark Web. I can almost guarantee a full ‘hit’ score, as hackers have mastered millions accounts and passwords. Check it out and change your passwords for all compromised sites.

Another feature that allows you 75Gb cloud storage with Norton 360. Man, man I was really getting fed up trying to activate this nice feature on the iMac’s, and finally contacted support in order to help me out. Disappointed ? yep, truly disappointed as this feature is only for Windows and not supported for Mac. I really don’t understand, why this option is available in the interface ( check first image) if it is not supported for Mac users. Why keep an unusable option visible that creates frustration with users. Shame on you Norton, this is an option that should also be available for Mac users.

Norton 360 Deluxe for Mac is a true winner, having a 100% virus/malware detection score and low system impact. Boasting truly great features, apart from the missing ‘cloud backup’ I recommend Norton 360 fully. It beats most competitors in every aspect. Its fair priced for the first year € 39,99 but more expensive for the second year € 99,99 ! The optional LifeLock protection is fantastic, but as most good things in life, this doesn’t come cheap. However you do get value for money with its protection forfeits . A happy user ends this review.