As of 2017, the software has about 500 million users worldwide. As of March 2017, Bitdefender ranks third in the global ranking of Windows anti-malware application vendors by revenue. [3]     Bitdefender Antivirus for Mac is their entry software application.

Security is one of the mayor problems for computers nowadays, especially PC systems are vulnerable for attacks by malware or sophisticated ransomware. Past year shows that even companies don’t have the right protection installed on their netword-servers. Ransomware is hot business as is identity theft. Cyberwar is on the edge of becoming a daily threat to anyone really. Even the average user can be faced with some serious (financial) problems when leaving their private stuff ready for anyone to steal. An internet security and antivirus is not something to think about but should have been bought with the computer from day one. Its just no use having regrets when its too late. Better Safe then Sorry is my opinion. So where does this leave us all knowing and understanding that a antivirus software app is needed. There are a number of good software apps on the market even some fair ones for free !

Just to sum up some facts:

_ PC’s are more vulnerable then Macs, Not is essence True, but there are more PC’s sold then Apple Mac’s, which offer a larger market for criminals.
_ In Q3 2016 alone, 18 million new malware samples were captured.
_ The amount of phishing emails containing a form of ransomware grew to 97.25% during Q3 2016, up from 92% in Q1 2016
_ More than 4,000 ransomware attacks have occurred every day since the beginning of 2016.

I hope these figures will put this article and the Bitdefender software in some perspective. Once downloaded and installed, Bitdefender Antivirus Mac provides a single screen from which all features can be managed and accessed. This makes working with the programme easy and simple in use. The dashboard provides all information whether your device is protected  and whether the software is up to date or not.

Bitdefender being one of the main players on today’s antivirus market disappoints me somehow with their interface. It might be just me being fond of classy looks, but it could be better in my opinion. But I’m glad it points out that ‘ I am safe ” which is a bonus these days. 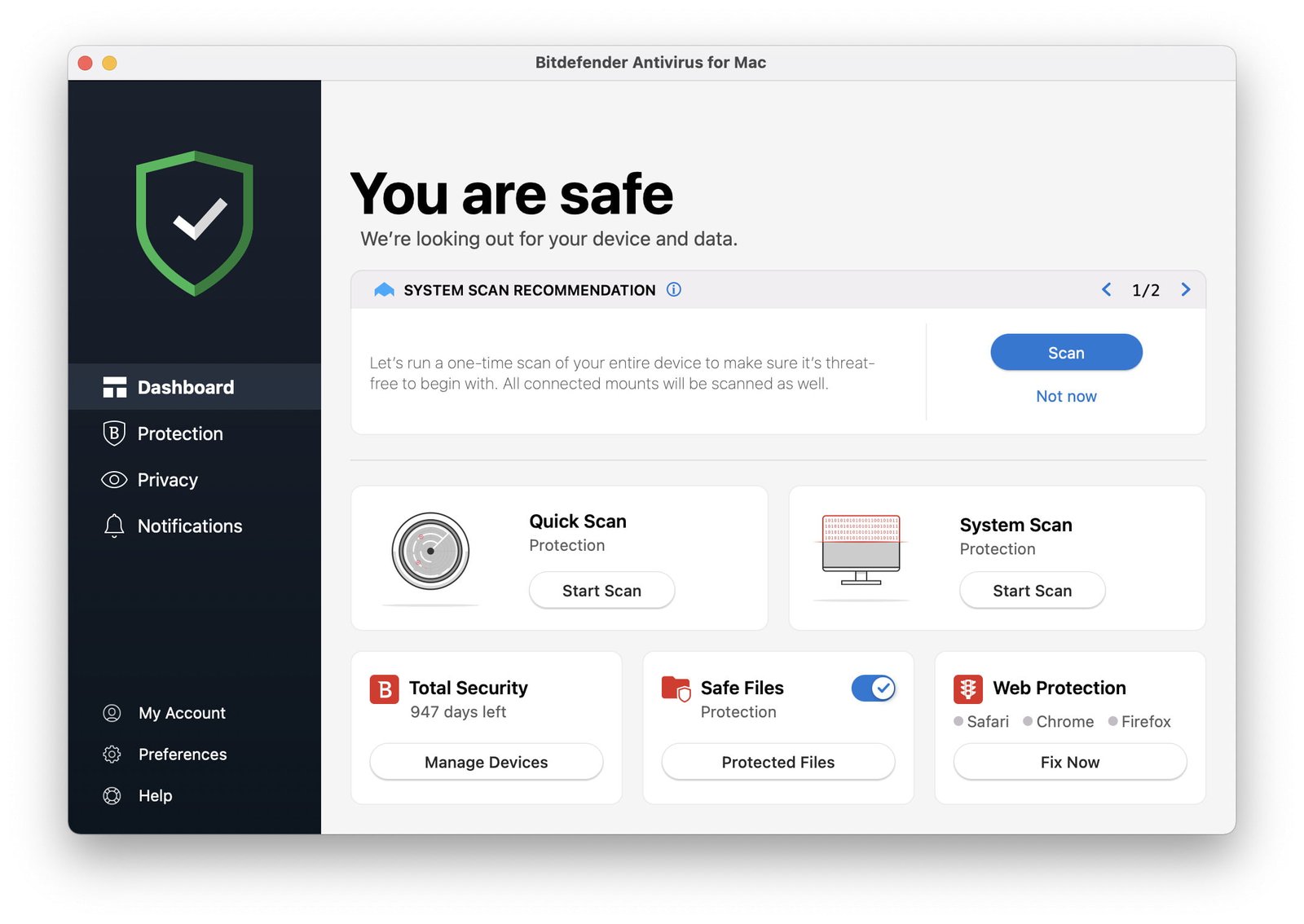 The preferences are basic choices and settings. ( below) All visible items are valid and easy to understand for any user. System scan is an ‘All or Nothing’ action, as it doesn’t provide a ‘choose your device’ option. The Protection section does provide a ‘custom scan’ ! 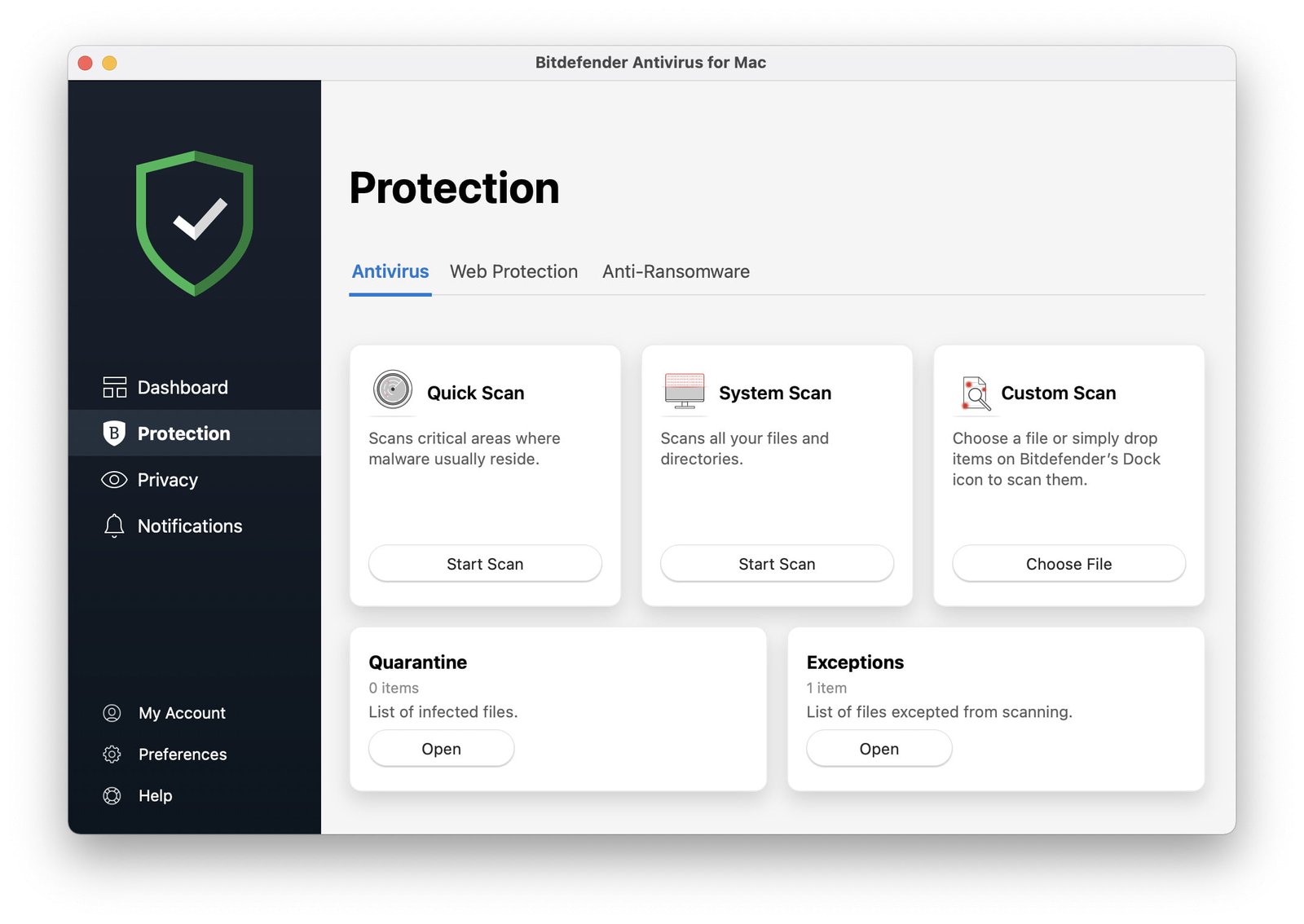 You can however also perform a single file-scan when you select your file or folder and activate the ‘service’ action with a ‘right click on your mouse’ when the pointer is on the file or folder. Scrol down with your mouse and choose ‘ services’ and you now have the ability to choose ‘Scan with Bitdefender’ from the menu.

Parental Advisor New
– With Parental Advisor, you can discreetly supervise your children’s online activities to keep them safe. Filter out inappropriate content and keep up with your kids’ location or activities from your web Bitdefender Central account.

Safe Files New
– With Bitdefender Safe Files you can prevent unauthorised changes to your most important files. You simply add folders to the watch list, and Bitdefender guards the files stored in them against ransomware and other types of malware. Only applications that you explicitly trust   are allowed access to your Safe Files.

So whats new in Bitdefender Preferences? This new version with ransomware protection provides the user with some extra choices to make, like Safe Files section to only allow protected locations to trusted applications. The new part of Bitdefender is an active script of Bitdefender checking every application at launch and set its validity to trusted or untrusted/block according to your choice made.

With Bitdefender Safe Files you can prevent unauthorized changes to your most important files. You simply add folders to the watch list, and Bitdefender guards the files stored in them against ransomware and other types of malware. Only applications that you explicitly trust are allowed access to your Safe Files. So this part of preferences is very important and choose wisely what to protect and what not.

This section shows you the choices made for all applications protected files access!  Check it from time to time to see if it still requires any adjusting.

As stated there are a number of antivirus applications on the market, and they all promise ‘ heaven on earth “, but which application is the best out there and at an affordable price? First you have to decide if you need a multi application which will also protect your windows computer, extra firewall, or ransomware protection. All buyers need to rely on third-party virustest results like AV-TEST. Considering the status of AV-TEST, we can be confident their results are full proof.

Their latest review scores as follows: 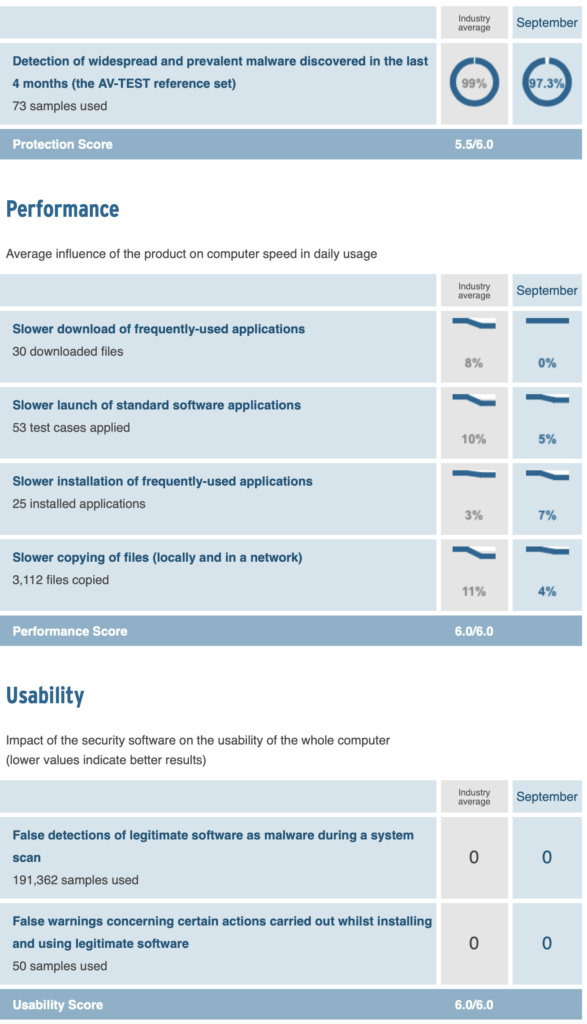 So, relying on AV-TEST results Bitdefender Antivirus scores really well but missed a few malware’s. The performance loss is marginal all compared. Still Bitdefender scores top marks on any test. Given its full application control I have it as a default Antivirus installed on our 27″ Mac’s.
Updates are regular and a popup tells you when its been applied. All packages behave like this in practice, but Bitdefender is silently running and protecting you in the background. The only time you really notice its AutoPilot is active, is when using an application for the first time. Downloaded or installed by residing applications, it tracks all behavior. A popup will ask you what to do trust or block. Bitdefender also has its own browser protection for Safari, Chrome or Firefox. This added security DOES effect somewhat your browsers performance.

Well it does in my browsers anyway. Should you enable this feature? By default I think its best to leave activated for most users, as there is a large group clicking on anything presented to get where they opted for. I always check/read carefully the full path, its just my nature not to trust internet.

Get yourself the best birthday gift and buy Bitdefender Antivirus for Mac or Bitdefender Total Security 2018 as these are the best performing and protection software applications around. Bitdefender scores top marks in any test, what’re can you ask for. The added file and Time Machine protection and a great price offers the best deal for now. Just checked the Total Security 2018 is set at €39.00 at their store, which makes it unbeatable at present. Minimum system impact and 100% detection, provide all we look for in an Antivirus application.