iMyfone Technology company provides data restoration and erasing services/tools to Apple (IOS, MacOS) product users and is located at Shenzhen, Guangdong, China.
The company was founded on Apr 10, 2015. Founder is Dean Huang and the number of Employees is estimated at 11-50 persons. The company is also known as iMyfone, iMyfone Software, iMyfone Technology Co., Ltd. (iMyFone iBypasser for IOS)

Why does one need an Activation Lock bypass utility really ! Having a fully great working iPhone or iPad, users will not often want to do without their Cloud services. It is one of the IOS features making people want to own an iPhone or iPad. However life gets a little complicated nowadays, as we are stuck with loads of passwords for all kind of services on the internet or hardware (TV , Network, Phones , iPad) and being human we sometimes forget a password and get stuck. On the internet this is no real problem as we can change the password by just entering your email at the prompt ” Forgot your Apple-ID and/or password?’.
With hardware like our iPhones this option doesn’t exist and leaves the user in the dark just staring at a non-functional piece of hardware. No use, banging your head to the wall, asking yourself.. what the… is the password ?

You’re locked out and nothing can change your unlucky day. But wait and read on…help is on its way… !

Great, you’ve dried your eyes and will be a happy person soon, after reading these steps and/or tricks. iMyfone brings us the iBypasser application to solve our problem and makes us end up with a usable ( though NO cloud, call function anymore) iPhone or iPad again. You may wonder ( well I did ) how they are able to resolve our problem with a locked device. Once you start running iBypasser the more experienced Mac users will understand that the application makes use of a downloaded jailbreak app called CHECKRA1N which is a free jailbreak application. So why not just use this application and do the trick? Well i’ll explain the needed steps to perform a jailbreak, which at least is a hassle for any novice user. To be frank I guess novice users won’t be able to perform a full jailbreak as it needs some understanding of the proces to follow. The next chapter will explain what and how a jailbreak works.

What is jailbreaking? Jailbreaking is the process by which Apple users can remove software restrictions imposed on iOS and Apple products like the iPad®, iPhone, iPod®, and more. Jailbreaking allows root access to iOS. It lets users install applications, themes and extensions, and other software applications that are not authorized by Apple’s App Store. iBypasser also uses the CHECKRAIN1N app which is developped by @CrazyMind90 and @AJBboCydia some ears ago, but gets updated to keep jailbreaking any new IOS edition. CheckRa1n is a permanent semi-tethered jailbreak for every iOS version running A5-A11 devices. Jailbreak does NOT solve the Activation Lock just the root access.

Use the link below IF you want to jailbreak your device (at your own risk ) and install Cydia , but the Activation Lock will remain! This is a more semi-permanent solution giving access to themes, software, apps. Think twice or read about this single application before use. iBypasser handles this software in an adjusted way to just jailbreak AND Unlock the Activation.

So, what is an Activation Lock ? According to Apple, “Activation Lock is a feature that’s designed to prevent anyone else from using your iPhone, iPad, iPod touch, or Apple Watch if it’s ever lost or stolen. Apple’s IOS software has build in security preventing unlawfull use of the device( your not the owner) when its lost or stolen. Users always setup their device with a security code and/or face recognition on the later iPhone models, and create an Apple ID- password. Your Apple-ID grants you access to Apple’s cloud and important apps like Cloud, Mail, Store etc. If you can’t remember your Apple-ID/password the iPhone is blocked, so can it be blocked by the ” Find my Phone app ‘, incase one lost their phone. iBypasser will gain access to the device allowing you to create a new Apple-ID/password and use it accordingly.

We tried of course the Activation Lock bypass for its claim. First we used the original Checkra1n.app downloaded from the URL above, and though the iPhone was jailbroken, we still needed to enter Apple’s ID/Password in order to proceed the activation of the device. No good in case you like mentioned earlier forgot/have not got a valid ID belonging to the device itself ( the device keeps its original ID in its chipset stored ). So we move on to THE INTERFACE and practical use of iMyfone iBypasser.app

iBypasser’s interface is minimalistic and presents all information needed to perform a good jailbreak / Activation Lock bypass. An external ‘jailbreak file’ (Checkra1n), is automatically downloaded and is needed for the full process to end. The complete interface more or less is just a visual guide for the steps to make rather then a programmed piece of software. However iBypasser does add some code to overcome the Activation Lock which is still left by Checra1n. The interface is just a set of text sreens where only the download of the jailbreak is activated with programming code/command. The clients actions to be taken are the same as the standalone Checkra1n.app, but now guided with an interface.

After the very fast processing of the jailbreak the interface takes you to its final steps. The end-result is great. Your former blocked iPhone is now overruling the Lock Activation and steps straight to the basic iPhones apps interface where you may set a new Apple ID/Pass combination. Is this Apple legal?, I don’t know. Jailbreaking is legal and only limits the security offered by Apple’s IOS software. You could have malware hidden in the jailbreak app or risk your privacy as you do with all apps used outside the Apple Store. I know Apple uses its Apple Store for money reasons, but it also provides safety for clients buying malware free stuff. 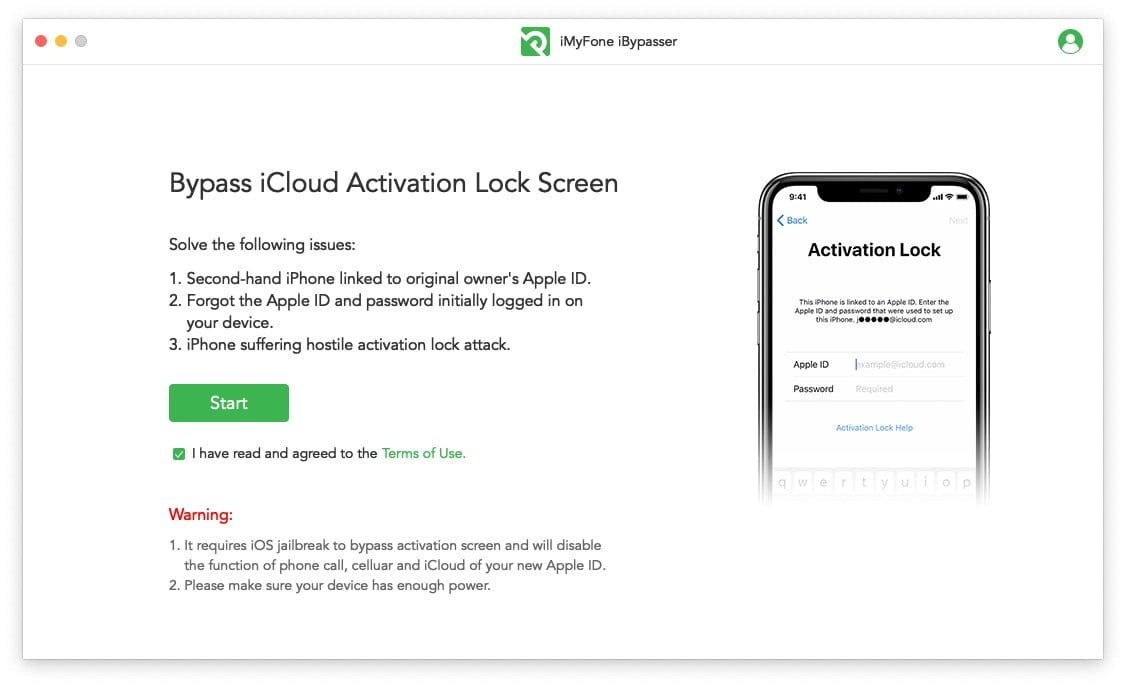 To show you the simplicity but really EFFECTIVE steps to bypass the Activation Lock, we show you the few steps to achieve access to your device. It only takes a second to feel yourself a professional hacker and boast your achievement to your friends and family. Still its iMyfone’s iBypasser that deserves all the credit.

Is there more to it ? Not really, as we now end with some claims made by the developer.

Bypass activation lock and get into your iOS device again.

Use a new Apple ID on your device.

iDevice won’t be tracked by the previous Apple ID.

iDevice won’t be remotely blocked or erased by the previous Apple ID user.

Now whats the benefit of this jailbreak really? To put it simple just gain access to your device and do a restore action in case you backed up the device trough iTunes. Keep in mind that ONLY Apple can unlock your device really rather then bypass an Activation Lock. You won’t be able to use the call function of the iPhone as mentioned earlier.
So its not for support of stolen iPhones, as the IMEI code is still valid at Apple’s servers where owners with access to ID/Pass can block their devices and only they can unblock. You can use the phones internet and such, but calling is impossible. Well I am not an expert in these matters but I think this article
describes the jailbreak / process / use in a simple way.

Therefore, if you want to gain complete access to your iPhone, use iMyFone LockWiper to remove all iPhone locks and restrictions.
What are the competitive features of iMyFone iBypasser:
1. The supported devices and iOS versions are many and relatively new: iPhone5s-iPhoneX, and it runs on iOS 12.3 or above (Note:
iOS12.4.5 and 12.4.6 are not supported)
2. Simple operation
3. Provide trial, you can know whether your device is supported by trial

We also provide 20% off (coupon code: iByLK20) on all license types of the iBypasser.

iMyfone’s iBypasser application offers real bypassing of Apple’s Activation Lock in a few simple steps. We tried and were succesfull with just a little efford. The application does exact what it claims and takes any user through a smooth process. This software is not meant for activating stolen phones as you can’t use the call function anymore when blocked, but (may) help out any user buying a secondhand iPhone. Its easy and effective and without any compromise. If you are in need for a great tool bypassing your Active Lock, look no further as this piece of software will put a smile on your face again.